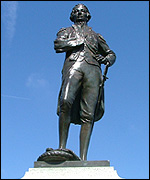 In Old Portsmouth Admiral Lord Nelson has been given a new sea view by moving his bronze statue, by Brooke Hitch, from its original site in Pembroke Gardens, where he spent the last 54 years, to Grand Parade. Here he has his back to the 11th century Royal Garrison Church (known as Domus Dei and where one of the choir stalls is dedicated to him) and he can see over the Saluting Platform to the entrance of the harbour.

When in 1951 Dr Aldous gave the statue to the city, the original site was chosen as being near where Nelson took his last walk down to the beach where in 1805 his barge was waiting to take him out to H.M.S. Victory. However, over the last ten years Dr Colin White has researched his walk and it has emerged that Nelson actually left from some yards further west.

It was also proposed to move one of H.M.S. Victory's anchors: this has been by the hovercraft terminal for as long as anyone can remember. It was Lord Frederick Fitzclarence who, when he was military governor of Portsmouth, managed to get possession of one of the famous ship's anchors and he had it put on the beach, west of the Clarence Pier and nearer where Nelson really did leave England for the last time.

In the 1880s the Portsmouth Corporation, having built the first Clarence Pier twenty years before, decided that the Victory anchor was in the way, so they moved it further east to where it is today. It was a strange site to choose as it is nearly on the spot where the French landed in 1337 and then proceeded to burn the garrison town of Portsmouth, killing many of the inhabitants. However, the plan to relocate the anchor back west to the King's Bastion, part of the old fortifications, has been abandoned.

There is a third memorial to Nelson that is not going anywhere for it is the 110 feet high column at the west end of Portsdown Hill, where a bust of Nelson sits in a niche at the top. This was one of the first Nelson memorials to appear, as it was erected two years after the Battle of Trafalgar. It was designed by J.T. Groves and the bust was exhibited in 1807 at the Royal Academy in London. It was paid for by Nelson's surviving comrades, who each gave two days of their pay.

Two centuries ago 300 feet up on Portsdown was considered an ideal position for the heroic admiral to watch the sea and for many years it acted as a landmark for shipping and many a telescope would have been trained on him. Now the column has rather disappeared amongst the Victorian forts, the radar masts and an abundance of 21st century technology, but Nelson can still see the Solent and Spithead from where he left to go and fight the enemy. Never to return.

(This account by Diane Villar was first published in the August 2005 edition of Hampshire magazine, but has been brought up to date following completion of the work in re-siting the Nelson statue.)